24% of the news sources -people quoted, heard, seen- are women, according to a 2015 study by the Global Media Monitoring Project (1). The Me Too movement started to spread in 2017 after the sexual abuse allegations against Harvey Weinstein. This movement led to a raise of women’s voices everywhere.

The goal of this project is to track the evolution of the presence of women’s voices in the media following the Me Too movement, to see if a major feminist movement like this one has led to an increase in the number of women quoted. We can then see if women are underrepresented in the medias and if they are only quoted on certain subjects. We can also include the ethnicity and the age of the women that the medias highlight to find which social backgrounds are best represented.

To conduct this project and find answers to these questions, data from the quotebank dataset was used. The quotebank dataset is a corpus containing 178 million speaker-attributed quotations sourced from 196 million English news articles between August 2008 and April 2020 (3).

A first glance to the data

Considering the data approach for this study, one can first look at how women are considered in the media as speakers relative to men and other genders. According to the latter, One can take all the years studied (2015 to 2020) and analyze the overall proportion. 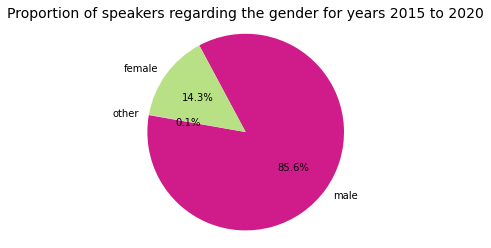 Based on the above pie chart, it is clear that men dominated with 85.6% of the gender’s speakers compared to women that only represent 14.3% of the speakers and the “other” gender with almost negligible proportion (<1%). 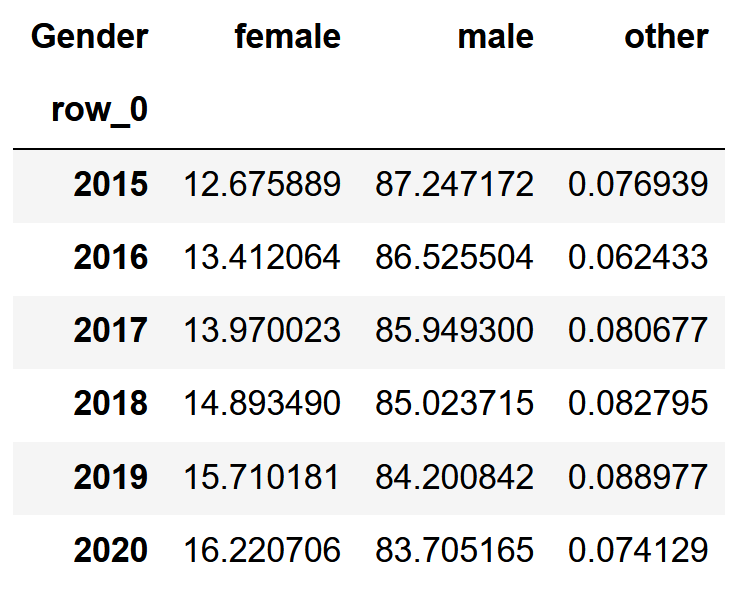 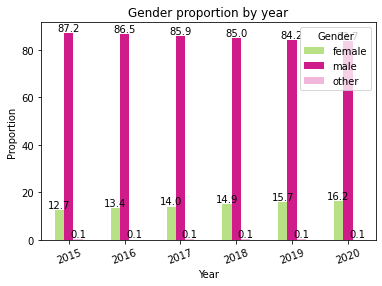 The men speaker proportion from 2015 to 2020 decreased from 87.25% to 83.71%, a 3.54% change. Meanwhile, other genders’ speakers proportion only increases by 0.003%, meaning that women absorb all the differences observed in the representation of each gender category.

Since we can observe an exciting change in the representation of women in the media, we can now perform further analysis to have a closer insight on this ongoing phenomenon which could be associated with the “Me Too” movement in 2017 or simple related to the cultural evolution since the first and the current feminism movement.

To analyse the evolution of the presence of women’s voice in the media, the percentage of quotes by female speakers in the quotebank dataset were calculated per month and ploted as a time series. 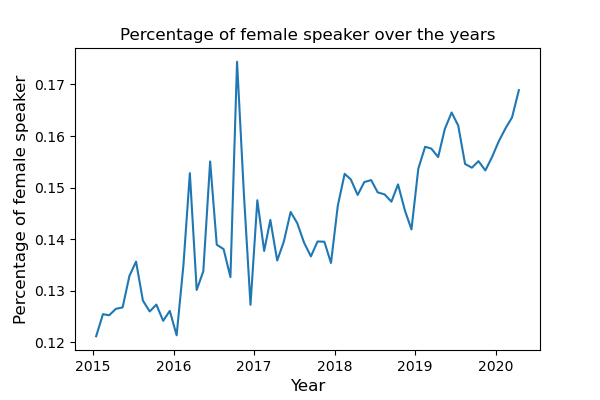 What is immediately noticeable when looking at the graph is that it shows particularly high fluctuations in year of 2016. We asked ourselves why that might be, and it turns out that the Quotebank database has fewer quotes for the year 2016. This smaller amount of data leads to these greater fluctuations.

Time series plots were also created for each year separately and can be seen below. 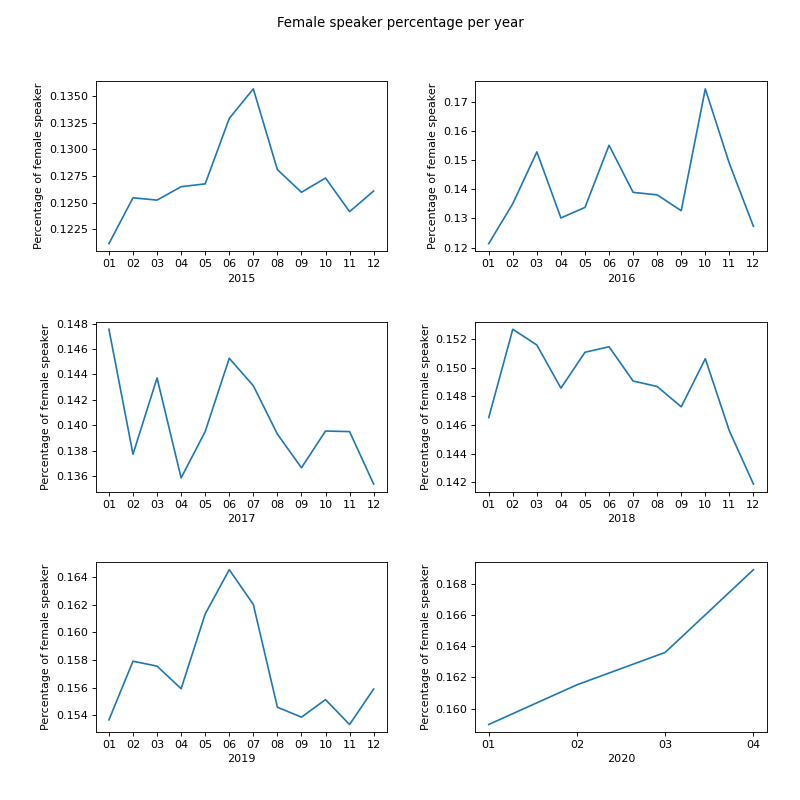 As for the year 2020, only data from January until April is available, it is not really a time series but nevertheless we have also illustrated it.

To detect the trend in the time series of the data, 4 different approaches were used: data was shuffled and plotted as comparison to the original plot, the rolling averange was conducted, the Dickey Fuller test was applied and linear regression was performed.

In this part, the percentage values from the original data were shuffled and plots were created. The approach to compare the plot of the original dat with the plots from randomly shuffled data can be used to get a first feeling for the trend of the data. 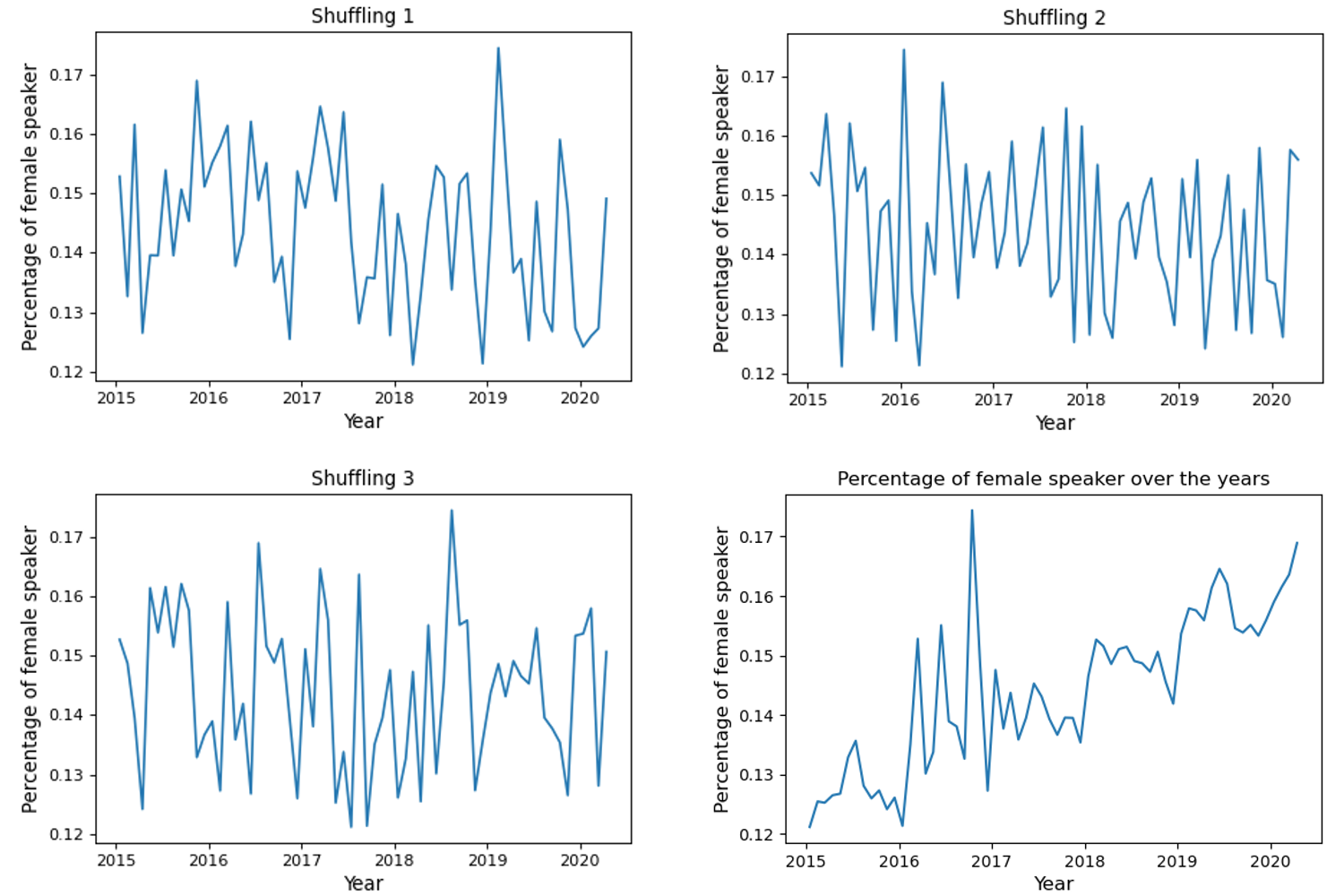 The plots created by shuffling all look quite similar, indicating no trend in the datapoints. In contrast to this, the plot of the original data seems to indicate an increase in the percentage of female speakers.

In statistics, rolling average (also called moving average or running average) is calculated to create a series of averages of different subsets of the full data set. When used with time series data, it smooths out short-term fluctuations and highlights long-term trends or cycles. 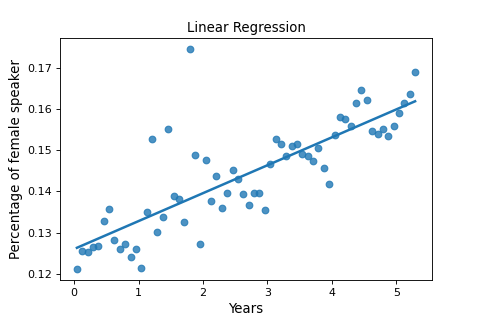 The linear regression results show an increase in the percentage of female speakers by 0.68 % per year.

For the time series analysis of our data, a check for seasonality was also performed to see if the percentage of female speaker has a seasonal trends. To do so, the percentage data for all the years 2015-2020 were plotted monthly into one plot. 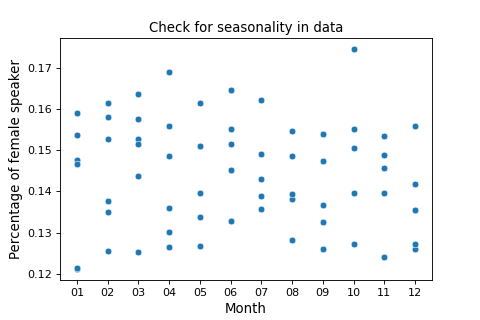 The plots shows no trend. The data points are randomly distributed and therefore no seasonality is present in the data.

Topic detection for women’s speeches in 2020

We now want to look into the topics on which women are cited from 2015 to 2020, do those topics change through the years? And are those topics different from the one found for men speakers?

Here are first the topics found after a topic detection on the quotes of 2020 (men, women and others). 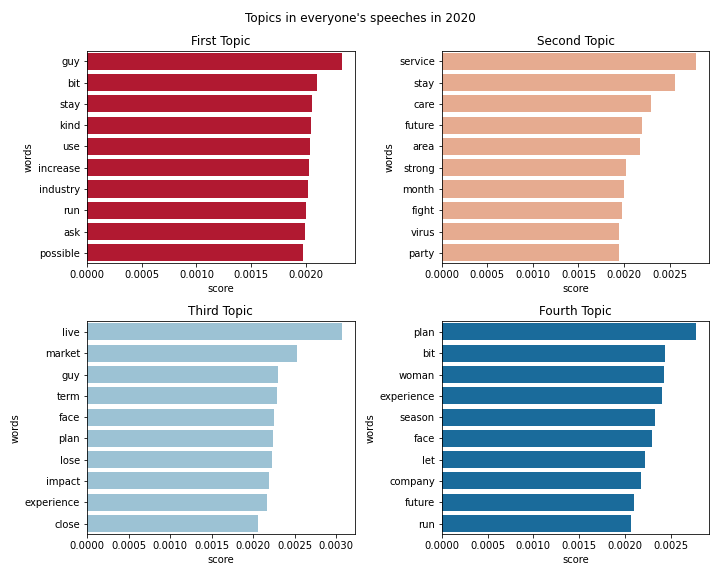 Then, the topic detection was computed for women speakers only, first for 2015, and then 2020, to try to see some potential difference that could be (or not) caused by the MeToo movement. 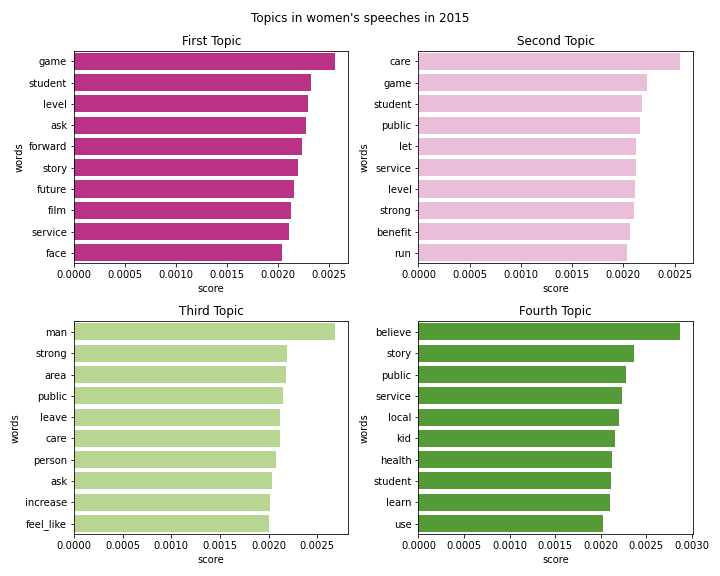 We can already see that the topics are different for women: we can find topics around students, and more philosophical words such as hope or live. It seems that the topic are generally more socially oriented. Let us now look at the topics for 2020 and try to see if there is a difference occuring after the MeToo movement. 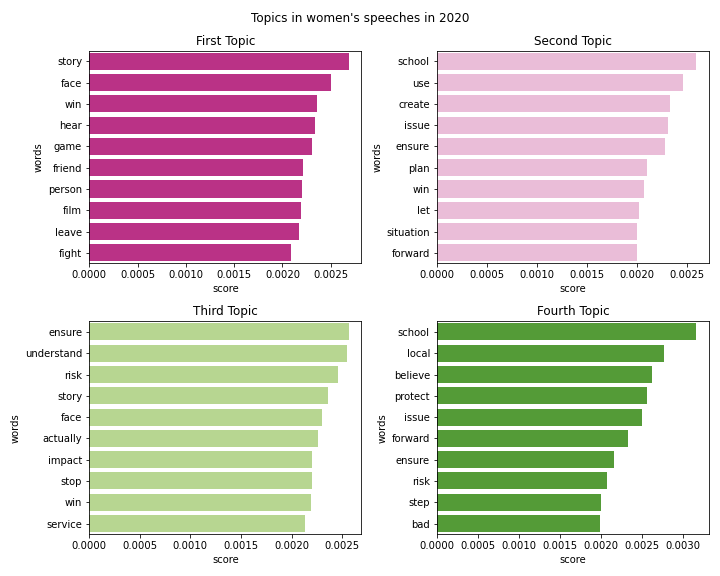 The topics stay quite similar, wich a shift from “student” to “school” and a lot on public. No conclusion can be drawn at that point.

Let us now look on the evolution of the important words during the 6 years and see if they are more or less present over the year, always looking for a shift in what women are quoted for. 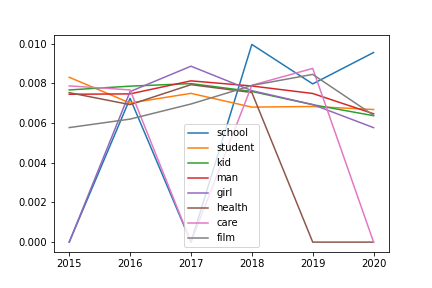 The words present some changes over the years. We can note for example that the occurence of health in the quotes drops, even during the COVID year. We could think this would make space for new subjects. The use of other words are quite stable. 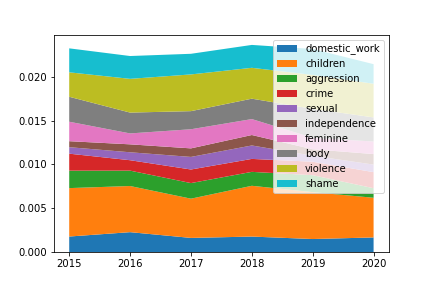 We can see that those themes are not used more in 2020 than in 2015, even a bit less. We can therefore conclude that the MeToo movement did not bring any shift in the topics on which women are quoted, but we can thankfully still notice that there is an increase in the total number of women quoted, eventhough it stays still insufficient.

Age, ethnicity and occupation of the speakers

What are the ages of the speakers ? What ages are most represented ? The following graph displays the year of birth of speakers from 2020’s quotes. 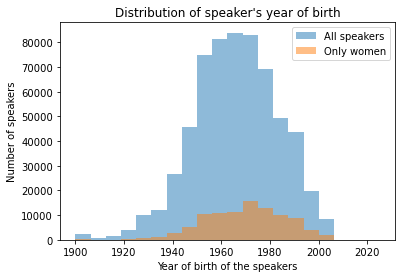 This graph shows that most speakers were born between 1960 and 1975 so are between 60 and 45 years old. The peak is at 1970 so the most common age of speakers is 50 years old for all speakers regardless of their gender. This trend is similar when only women speakers are taken into account. The age of the speakers is not influenced much by their gender, contrary to other aspects that have been seen before. 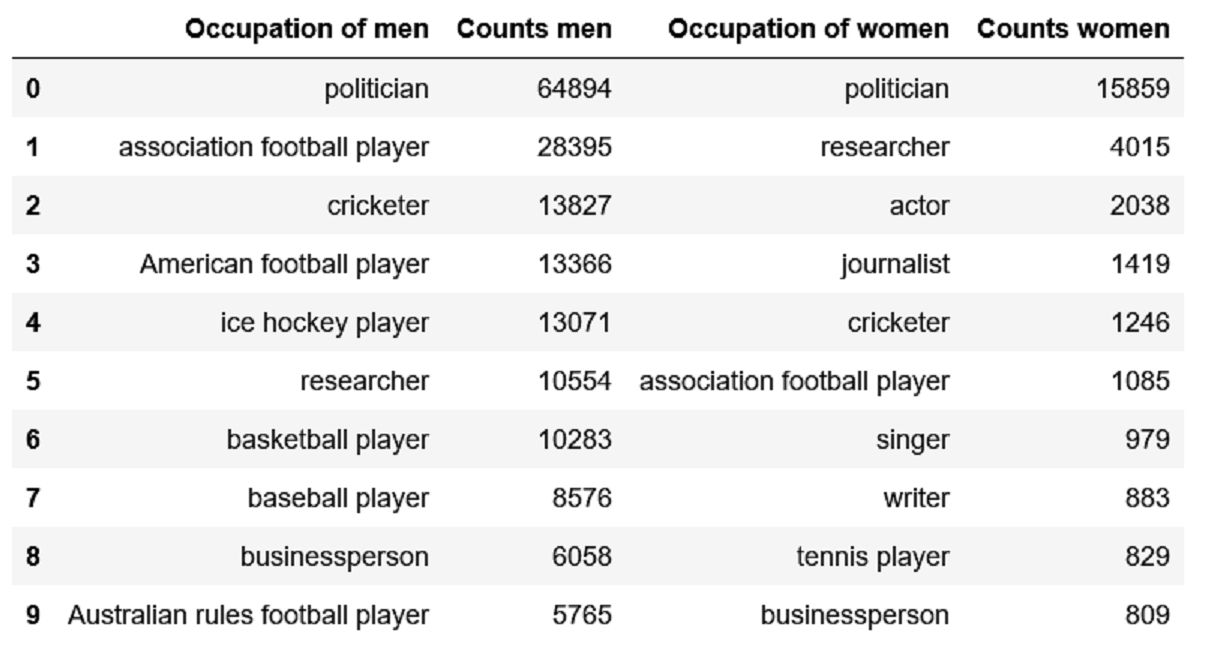 The following table shows the top 10 ethnicity for men and women speakers in 2020. The first ethnicity for both men and women is African American which seems incorrect. The data contained a lot of NaN for ethnic groups so we assumed that many White American speakers have an ethnicity that has not been reported so is stated as NaN. 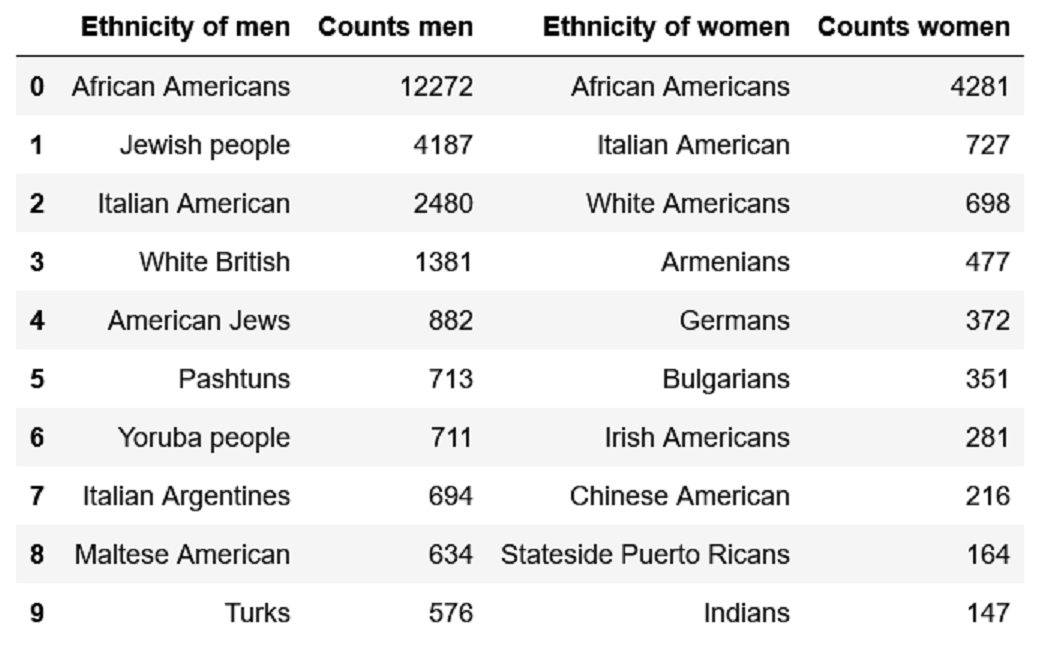 The age and ethnicity of the speakers do not show a big difference regarding the gender. However, the domain of occupations are quite different for men and women, but we shouldn’t forget that in many fields there is an imbalance between men and women. There are much more men that are sport professional than women for example.

We can see a positive evolution of the percentage of women speakers, that is, according to earlier findings, significative and not only a hasard. The MeToo movement might have had a impact on this percentage, eventhough this is not certain.

A last small computation revealed that the word “feminism” only occured 23 times in all the quotes told by women in 2020 as well as 4 times the word “metoo”, which is still incredibly low and shows a lack of awareness on this topic.

The MeToo movement does not seem to have created any shift on the topics discussed by women in the quotes, but we could see that the those topics are different than those related to men, as well as the people cited had different occupations depending on their gender. A big work still needs to be done to reach equality in the representation of the genders.